2018 was a busy year for Uppsala student Emma Tysk. She was awarded ‘IT woman of the year’ and ‘Uppsala student of the year’, while also finishing her BA project on teaching programming for kids and started to work as a web consultant. It is with great commitment she engages in the issue of gender equality in the IT industry, and through talks at schools and via social media, she wants to challenge the negative stereotypes associated with programming and IT.

We interviewed her about her work and the importance of female role models in IT (something Nordwit researcher Hilde Corneliussen has blogged about before). 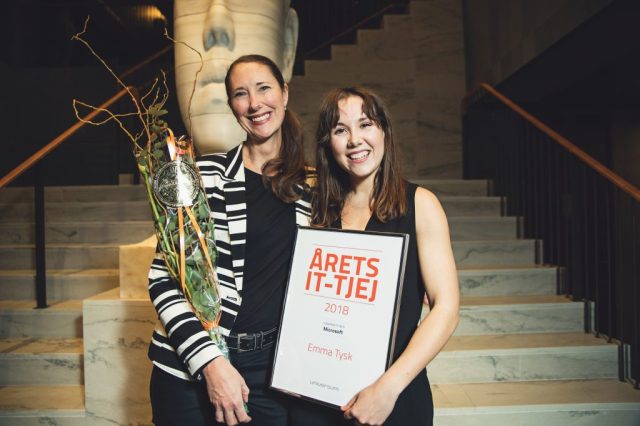 Name: Emma Tysk
Age: 24
Lives: Uppsala
Does: Work as a consultant at TV4, study civil engineering in information technology at Uppsala University. In the free time I like to paint, watch too many YouTube videos, and hang out with friends.
Inspiring IT women: Ada Lovelace, @codergirl_, Sofie Lindblom, and my best friend Moa Skan (who is doing her MA thesis in space physics, a cooler person is hard to find)

Every year Microsoft, in collaboration with Universum, selects one student to represent women in IT. In 2018, Emma was designated the award with the following motivation:

With great passion, genuine commitment and energy, she is already an enthusiastic missionary for IT and technology issues among young girls. She wants to attract more women to the tech industry and accommodate talented people who find it. It is with great pleasure that Microsoft for the 16th year can designate the year’s IT-girl and look forward to making a great deal together with this year’s winner Emma Tysk.

And in November, Emma Tysk received a second award, the ‘Uppsala student of the year’, founded by the Anders Wall Foundation. The scholarship is awarded to a student who has distinguished themselves through their good, creative efforts at Uppsala University, and has developed entrepreneurship in connection with the University’s activities.

Congratulations to both awards! What has this meant for you?
Thank you! I can tell you that it was a nervous girl giving a speech in front of 2000 people in the Grand Auditorium. I can honestly not believe that it actually happened, and that I made it. But what a feeling stepping of the stage!
Both of the awards has meant a lot for my confidence and my energy. To be able to meet inspiring leaders in the IT sector and successful entrepreneurs – wow! I believe I now have a new perspective and understanding of why the things I do is important, and that has made me think bigger.

What sort of programming do you do?
Right now I am working as a front-end developer. Front-end means I am working with the visual application, I implement the design and make sure it looks good on different devices and screens. It’s super fun!

Tell us more about your bachelor project
For my bachelor project, I developed together with two other students an application in collaboration with the non-profit organisation HelloWorld!. The purpose with the application was to teach programming to kids through animated pictures and coding. We wanted to do a visual application that would be inspiring!

Why do you think there are fewer women than men working in the IT sector?
There are of course several reasons for that. One reason so few girls turn to technology at a young age is probably because we come in contact with technology later than boys. It is more socially acceptable for boys to play TV and video games and they often hang out in groups where this interest is encouraged. Another reason, I think, is that many people associate programming with negative stereotypes, and many girls feel like they don’t have people to identify with in the business.

In your opinion, what is needed to attract more women and girls to IT?
A big problem is the lack of knowledge of what it actually means to work in IT. When I grew up programming was not something you got in contact with in school, it wasn’t a career option mentioned as with ‘researcher’, ‘teacher’ or ‘doctor’. I associated it with Excel sheets and tiring, dark rooms. To attract more girls I think we need to spread the word about all the exciting projects one can work with and how programmers are! I myself could never had dreamed of my first job being application and web designer at TV4. It is so exciting and fun, and through my work I can reach out to so many people , you are really part of the development of society.

Why are female role models important in IT and technology?
In order to inspire more women to turn to technology it is so very important that women are given a platform to share experiences. I myself missed a female role model in IT when I was about to choose what to study. If I would have had someone to look up to in the business, I would without doubt been interested in programming much earlier on. Just to be able to see an example of what you could work with makes a huge difference. Way too many people, young and old, have no idea how a workday for a programmer actually can look like.

Do you try to inspire and get girls and women interested in IT and programming somehow?
Through my Instagram account emma.codes I share my everyday life as a programmer to show that it is super fun! It’s a creative and exciting job where you get to travel, meet inspiring people and work in many different areas. I have also visited my old high school where I did a presentation about my work and my studies at Uppsala University. I hope to be able to visit more schools in the future! 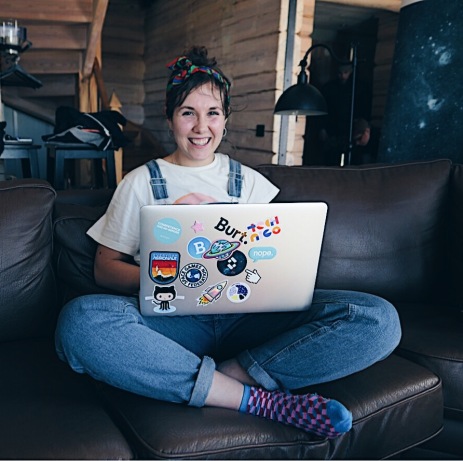 I want to post an example of a person who might not fit in to the stereotypical image one might have of a programmer, but who loves and likes what she does.

Do you have a role model now?
My friend Moa Skan is my biggest female role model. She studies space physics and is actively working with attracting a diversity of people to STEM (Science, Technology, Engineering, Mathematics). This summer she will be a project leader for Rymdforskarskolan, with the aim to promote interest in astronomy and aerospace among the Swedish youth. She will also participate in Almedalsveckan and talk about the importance of investing in the Swedish space industry. To me, Moa is a genuinely fantastic role model. She gives me energy to dare more and keep up my commitment and interest.

Tell us about your plan to create a network for female students who will go out and talk about IT at schools!
When I started to study IT I realized that I could have been interested in programming much earlier on in life if someone just had told me what it actually means work in this sector. I thought I might be able to make a difference for girls in the same situation as me by telling them about my everyday life as a programmer. After having presented at my high school I started to dream about sharing that experience with other women in the same business as me – to give them a platform to share their experiences and at the same time inspire others!

What are your hopes and plans for the future?
I have always dreamed of doing a career abroad for some years. I hope that I one day live in New York and work as a full stack developer. I also hope that I can keep up my interest and inspire more women to turn to IT – maybe create a international network?

You are moving to Melbourne in February. What will you there?
I will go for an exchange for a year, and I am so excited! I will take courses in human machine interaction, and will probably travel around some in Australia. But I sincerely hope I can avoid spiders, they are my biggest fear!

Last, but not least, do you have any tips for those who wish to start coding?
To learn the basics in web developing I think is a good first step. Google ‘beginner tutorials’ in HTML and CSS. You can learn to build your own website in just a few days (super cool). If you are interested in design I would recommend to start with Java, which is a very good language for beginners. But don’t forget – it takes some time before the penny drops! To learn programming is kind of learning a new language. It’s tricky in the beginning but when you know the basics it will go fast!

We thank Emma and wish her good luck down under! 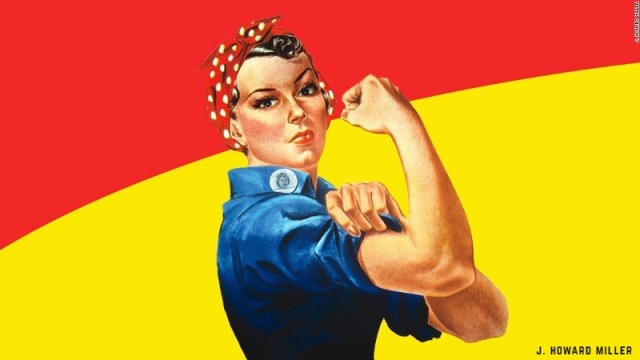 Innovation, which is traditionally defined as any idea, practice, or object that is perceived as new by an individual or other unit of adoption, is a vital part of Nordwit research, as we aim to learn more about mechanisms supporting or working as obstacles for women’s careers in technology-driven research and innovation in and outside of academe. The focus in two sub-projects is on innovation systems as sites of study which consist of institutions and networks across public, private and knowledge sectors that have as one goal the promotion of activities related to research, development and innovation. In these sites of our bottom-up study, we meet and interview women as well as companies, institutions, funders and other relevant actors, that contribute to the innovation landscape. In this context we collect stories about women’s experiences, and we discuss challenges and strategies related to gender equality in the institutions.

From a feminist perspective, the ‘natural’ association of innovation with male-dominated fields like engineering, technology, and science, is criticized because it marginalizes women from participating in the work of innovation. Feminist perspectives problematize what is considered to be “natural” aspects of innovation by applying feminist theories, such as intersectionality and “situated agency”. The Nordwit framework recognizes that innovation happens in different contexts and spaces that are gendered in various ways. Thus, we consider innovations to include technical, service and social innovations in public and private sectors.

Our study documents that digital innovation, as part of the ongoing digital transformation, happens across sectors. This creates new techno-spaces, and many of the women we have interviewed have found work in such places rather than within the IT sector.

In December, Gilda Seddighi started her Nordwit blog post with the following words:

“´We do not treat men and women differently in our organization’ is a strong discourse many proudly share with us, as we talk and discuss strategies for gender equality in the field work.” 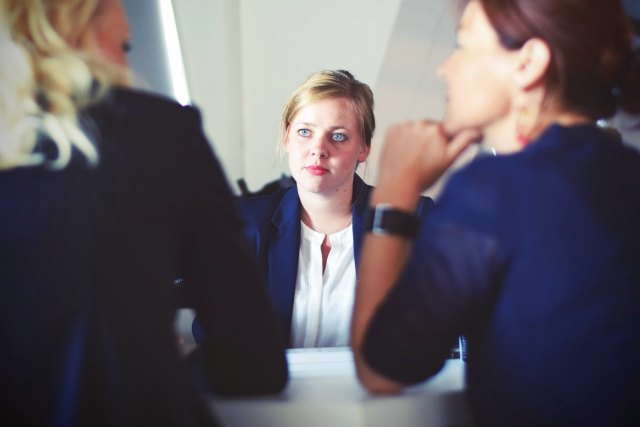 Indeed, this is an often told claim that hide the inequalities in organizations, as Gilda stated. But what is then hidden? How gender and gender based inequalities are inevitably inscribed in and through organizations, businesses and working life institutions, despite of public equality statements? Some answers are provided by Jatta Jännäri in her PhD thesis Mediated Construction of an Ideal Gendered Manager and Employee (2018) published at the University of Turku. In the second article of the thesis, Jännäri together with Seppo Poutanen and Anne Kovalainen analyse how women in leading positions have been represented in The Economist between 2006-2013. Here they distinguish four ways in which women-leaders were described and presented:  in relation to 1) their appearance, family ties and kinships; 2) the pioneering femininity as a competence; 3) representing care continuity in companies; and 4) the problems of their competences. Female leaders were understood as individual and flexible people, and simultaneously as stereotypically feminine. Old stereotypes apparently have impact on women’s chances to succeed in recruitment processes and on different and unequal treatment in organizations.