Why is it so difficult to achieve gender balance in IT work? Our study of attitudes towards women’s under-representation in IT and how IT employers and organizations deal with this imbalance, give some of the answers. These are some of the attitudes that work as barriers to recruit more women to IT work:

Based on this analysis we have proposed a model that contributes to explaining the Nordic Gender Equality Paradox, illustrating how the gender equality norm can co-exist with the very attitudes that undermine the norm.

We are also very proud that our paper won the Outstanding Paper Award at the ICT, Society, and Human Beings 2020 Conference! 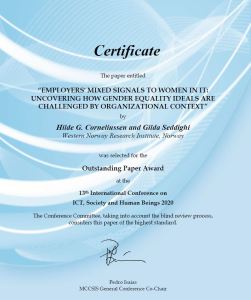